Truck hydro cooling, was created by sweet corn growers of North Carolina. Truck hydro cooling is the least effective application. Produce in crates are loaded into a truck perforated pipes are then inserted into the truck above the produce crates. Cold water is then showered down from the pipes directly onto the crates. The water is then collected below the truck bed and recycled. The temperature of the produce is only lowered by a maximum of 15°F. The reason for lack of cooling is due to water running through the spaces between the crates, not the surface area of the produce.

Truck hydro cooling uses a high capacity pump, pipes, valves, and an ice crusher. Water is cooled and pumped through a piping system. The piping system is inserted into the trailer above the load to deliver cold water. The chilled water comes from a stationary pump. The load size typically ranges from 600 to 800 crates. The truck hydro cooling process can take up to an hour. Once the product is cooled, it is then covered with layers of crushed ice and shipped immediately to vendors.

The cooled water piped over the produce moves at around 1,000 gallons per minute. The water is cooled by blocks of ice in the tank. The ice comes from a commercial producer that can deliver ice in up to 300-pound blocks. For every 100 gallons of water, a 300-pound block of ice is required. The left over water is collected, filtered, cooled again, and recycled.  Truck coolers are a cheaper way to hydro cool, but do not cool produce as efficiently as commercial hydro coolers like batch, or conventional continuous cooling applications. 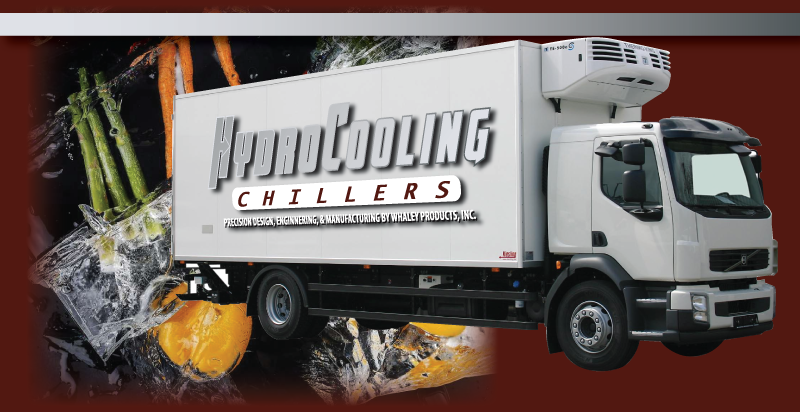